IMLAY CITY — Each year, about 70,000 students in grades 6-8 across the United States take part in the VFW’s Patriot’s Pen youth essay contest.

Participants are eligible to earn acclaim and potentially win a share of more than $1.4 million in state and national awards. 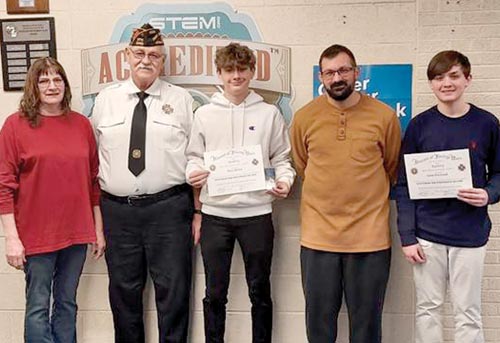 The purpose of the essay contest is to encourage middle- schoolers to write 300-400 word essays on a patriotic theme selected by their local VFW commander.

As the local winner, Trace will now move on to VFW’s state competition to take place in Kalamazoo in late January.

This was the ninth year that LaMarra’s classes have participated in the contest.

Of those submitted to LaMarra for consideration, he selected 20 essays to be forwarded Imlay City VFW Post #2492, where they were judged by VFW Auxiliary members.

Each first-place state winner receives a minimum of $500 at the national level, and the national first place winner wins $5,000.

The authors of the top eight local essays were each awarded $50 checks during a luncheon/ceremony at the Imlay City post in late December.

The eight essays were then forwarded to be considered for placement at the Michigan 9th Congressional District competition on Sunday, Jan. 15 at the Yale VFW Hall.

LaMarra added that the top three essays at the State competition will go to Washington D.C. for the National competition in the spring of 2023.

LaMarra expressed pride in all of his students for their hard work.

He also offered a special “thank you” to VFW Post #2492 members Rosemary and Butch Earehart, who were integral to the judging process.

“I want to thank them for their time and effort in reading the student’s work,” LaMarra said. “They submitted all the proper paperwork, so the students will be eligible for the later rounds of competition.

“Their efforts did not go unnoticed.”