IMLAY CITY — These days, when people are looking to learn how to do something new, YouTube is the go-to place. Whether it’s repairing a leaky faucet or fixing a cell phone glitch, the popular video sharing platform usually has the information.

However, there are still some things that can’t be covered in a 10 minute video tutorial. Being an effective and knowledgeable newly elected government official is one of them.

For incoming city commissioners Barb Yockey and Shane Collison, learning the ins and outs of their new role at a specially designed Elected Officials Academy course offered through the Michigan Municipal League was way better than a YouTube video and way worth the effort.

Yockey, an attorney with more than 35 years in practice, says she was eager to learn more about city government after winning a four year term in November. Earlier this month, she traveled to Ann Arbor to participate in the class.

“I thought it would certainly be very important to go to the seminar because I’ve never served as an elected official before,” she says. “It covered all kinds of different areas that I thought it would be good to know more about.”

Those areas included the state’s Open Meetings Act, Freedom of Information Act, ethics in government, budgeting, audits, and being responsive to the electorate. 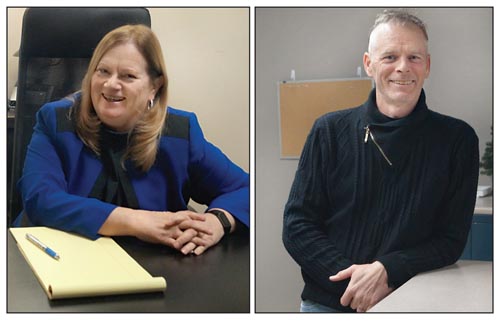 Imlay City Commissioner’s Barb Yockey and Shane Collison are enthusiastic about continuing to make Imlay City a great place to live and work for its residents after completing a Michigan Municipal League course for newly elected officials.

Yockey says she was particularly interested in budgeting and accounting, as it had been a number of years since she’d dealt with those issues other than her personal and professional finances.

“I had an accounting class in college but let’s not talk about how long ago that was,” Yockey grins. “I certainly have to know accounting principals as an attorney, but accounting, auditing and budgeting for a city is completely different from anything that I’ve ever dealt with before.”

The source of the city’s funding—whether it’s property taxes, from the state or federal government, or elsewhere—comes with restrictions and requirements, and are important elements of any municipality’s budget, Yockey adds.

“I had no idea about any of that stuff, so listening to that presentation was extremely helpful for me,” Yockey says. “We’re about to go into a budgeting session for the city in March, so for me to have a much better understanding of these things will help immensely.”

For Collison, who earned a two-year term in November, learning more about his new position as a commissioner was a priority. Raised by former Imlay City Manager Dennis Collison, the U.S. Army veteran was somewhat familiar with the workings of city government, but wanted to know more.

“I just felt that in order to really be effective, I needed to do some learning, to know more about the commission than what I knew from my dad for my whole life,” Collison says. “I ran for commission for the residents, not for myself. I learned a lot about meeting rules, and came away with a lot of information that I didn’t previously know.”

More information on the Open Meetings Act, FOIA requests and ethics as an elected official were noteworthy for Collison.

“The Open Meetings Act was particularly interesting, realizing how important it is to get information out to the citizens and make sure they’re aware of what’s going on,” he says.

Collison completed the course online, as it was the only option that fit with his work schedule.

“It was very beneficial and may have been better in-person for more interaction with others, but I did learn a lot from it,” he says.

Yockey agrees that in-person learning alongside other newly elected officials was enlightening—and even made her feel grateful for the consistency of and cooperation in Imlay City’s government. Many municipalities—large and small—do not boast the same qualities.

“Listening to people from other communities talk about what their circumstances are made me feel so incredibly grateful and thankful for living in Imlay City, and also because of the great system of government and administration—from the staff and department heads to the city manager (Craig Horton) and his extensive background in finance” she says. “When you talk to people from other communities, who don’t have that financial background and expertise, you realize how fortunate we are.”

“We’ve got stability as far as our leaders and department heads, and we’ve got a good mix on our commission of newcomers and people who’ve been on the commission before,” he says. “I think that’s important because the new commissioners learn the background (on issues) as they come up.”

Collison says that continuity is a bonus for city government as things press ahead, helping shape the future of Imlay City—whether it’s improving the infrastructure or purchasing a new fire truck.

“It’s important to know why we’re doing what we are,” Collison says.

If there were one thing he’d like to see change, it’s public participation in city government.

“I’d like to get citizens to come to the meetings so they know what’s going on,” he says. “It would be really cool to have people come to just see the things that we’re working on and discussing, and why we reach the conclusions.”

Both Yockey and Collison say they’re committed to doing their best for those who elected them, and look forward to their service.

“I’m really enjoying it so far, and learning a lot,” Collison says.

“To have the depth of experience of our department heads, city manager and police chief to rely on as a
new commissioner is incredible,” she says. “I am so grateful for Imlay City.”

The Imlay City Commission meets the first and third Tuesday of each month at 7 p.m. at City Hall. To contact your commissioner, visit https://www.imlaycity.org/government/city-commission/ for an email directory. Call 810-724-2135 for more information.