Cards get win over Memphis 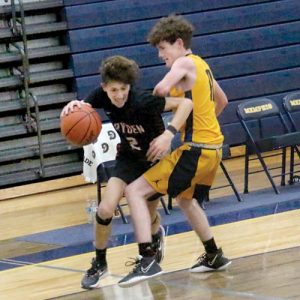 Dryden’s Sonny Coscione fends off a Memphis defender during their clash this past week.

DRYDEN — Dryden earned a 64-48 win at the expense of Memphis in a non-league varsity boys’ basketball confrontation last Wednesday night.

With the final, Dryden improves to 5-5 overall. Memphis slips to 2-8 this season.

In Wednesday’s confrontation, Dryden opened up a 17-11 advantage after one quarter was complete and stretched their lead to 30-22 at halftime.

When the action resumed, Dryden struck with a 15-7 third quarter edge. That enabled them to go ahead 45-29 with 24 minutes gone.