Petoskey stone has a rival

IMLAY CITY — When you think of the Mitten State’s iconic rock given up by the rolling Great Lakes, it’s likely the petoskey stone comes to mind.

As attractive as that fossil/rock is, the petoskey stone has a rival—and it’s a real gem. 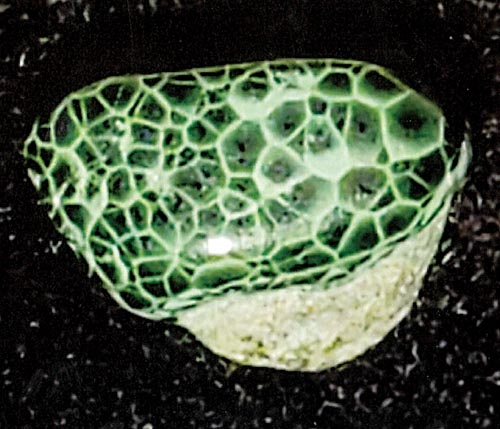 Gemstones are rocks or minerals considered to be precious or semi-precious, and are often cut and polished to be used in jewelry.

Johnson, and his wife Suzanne, are using some of their greenstone collection to do just that. For Johnson, using the chlorastrolite he gathered as a boy combing the beach is a trip down memory lane in more ways than one.

“When I was a kid I would go to Isle Royale with my dad to go fishing and backpacking,” Johnson recalls. “You were allowed to collect stones on the beaches back then, and I collected a good amount of them.”

Rock hunting was one of his favorite pastimes, and back then he’d often tumble, grind, or cut what he’d found. A few years ago, Johnson started cutting his Isle Royale greenstone again, to fashion into jewelry for galleries around Michigan and Wisconsin. The greenstones are a natural fit for jewelry, he adds, for a number of reasons.

“It’s quite fascinating that the only place on the planet that you’ll find them is in Michigan, up in the Keweenaw Peninsula or on Isle Royale,” Johnson says. “They’re beautiful and durable, and they’re quite rare,” Johnson says.

In the 1920s and ’30s Isle Royale greenstone jewelry was sold at high end stores like Tiffany’s in New York City, and other elegant jewelers worldwide.

Johnson revived that interest as well, as the Isle Royale greenstone jewelry he fashioned was popular at Christmastime, making distinctive gifts for people who love the Great Lakes State and all it has to offer.

“There are lots of people that just love it,” Johnson says of the greenstone.

Its striking appearance and rich history make the green star stone special. According to grpm.org, “chlorastrolite is a variety of the mineral pumpellyite and forms in the cavities of basaltic lava from the cooling gas.

“Its presence in Michigan is a result of the Midcontinent Rift System, a split in the Earth’s crust that began 1.1 billion years ago. The rift system ran from Kansas up to Lake Superior and then back down to the Detroit area, resulting in a major eruption of lava that took place over the course of 20 million years, forming rock deposits up to 15 miles thick.”

While the petoskey stone has a fascinating history as well, Johnson hopes to elevate the status of green star stones.

“Mostly it’s about getting people to know that petoskey stones are not the state gemstone, and that there’s a rare gem found in the whole world that’s only found right here in Michigan,” he says.

Further, Johnson says, though chlorastrolite is formed in the same way as diamonds are, and are just as rare, they are not as costly.

A carat green star stone goes for around $80, while larger pieces—the size of a thumbnail or so—fetch $800 to $1,000 and usually land in museums.

For more information about the Isle Royale greenstone, stop in at Gem and Diamond Specialists in downtown Imlay City or call 810-724-7829.