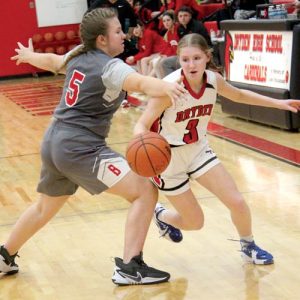 Sophia Peter, of Dryden, drives past a Bentley defender in last week’s clash.

With the decision, Dryden improves to 5-3 this season.

In Tuesday’s meeting, Dryden charged out to a 13-2 advantage after one quarter was over with and stretched that cushion to 36-9 at halftime.

When the action resumed, Dryden struck with a 14-4 third quarter edge. That left them holding a 50-13 lead with 24 minutes gone.

Dryden then outscored Burton Bentley 13-3 the rest of the way, closing out a 63-16 win.

Ava DeVlaminck and Isabella Weier (eight each) furnished the next highest Dryden point outputs. They were backed by Keira Miller, Delaney Wolle and Lauren Abromaitis (six each), Olivia Stickler (five) along with Sophia Peter and Lucia Munoz Rodriguez (four apiece).