Father of two killed in hit and run

DAVISON TWP. — Davison Township police continue to investigate a hit-and-run in the 1000 block of Gale Rd. that claimed the life of a 23-year-old Attica man Saturday, Jan. 14.

The victim was identified as Jose Salcedo, a father of two children and former Imlay City High School student. 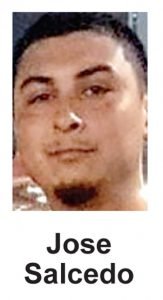 Davison Township Police officers initially went to the location on Friday (Jan. 13) morning in response to a 911 call.

Police reported that the original 911 caller said he had seen someone walk through a field towards a car with its hazard lights flashing on I-69.

Officers at the scene spoke with two passengers who said the driver, Salcedo, had gone to get oil. When he did not return, his family called police to report him missing.

It was not until Saturday morning that a mail carrier spotted a body in a ditch in front of 1068 Gale Road and called 911.

Follow-ing an investigation, authorities determined that the deceased man was Salcedo.

Police believe Salcedo was struck sometime Friday morning between the hours of 6:15 a.m. to 7:15 a.m.

According to police, Salcedo’s girlfriend, Maribel Rodriguez, also responded to the scene.

“I ran to go see him, see if he was there,” Maribel said in the police report. “The cop stopped me and told me he passed.”

The Davison Township Police Department is seeking the public’s help in identifying and locating the driver who struck and killed Salcedo.

A GoFundMe page has been set up to help the family with funeral expenses.