Cards bounce back with a win 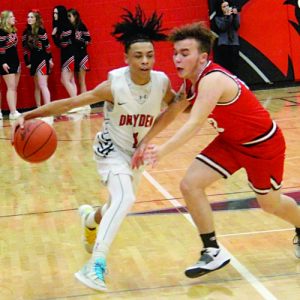 Jaylin Taylor, of Dryden, keeps a Bentley defender away from him in their game last week.

With the final, Dryden improves to 3-5 overall.

In Tuesday’s meeting, Dryden spotted Burton Bentley a 9-3 advantage after one quarter was complete.

The middle two quarters saw Dryden bounce back with a 41-23 edge, grabbing a 44-32 advantage with 24 minutes gone.

Dryden then outscored Burton Bentley 16-12 the rest of the way, putting the finishing touches on a 60-44 victory.

Jacob Burgess (24, including a pair of trifectas) and Dylan Ledford (16, featuring a trey) posted Dryden’s highest point totals. They were backed by Jaylin Taylor (eight points), Dorian Lewis (five), Noah Slagle and Sonny Coscione (three each) along with Jacob Buffo (one).