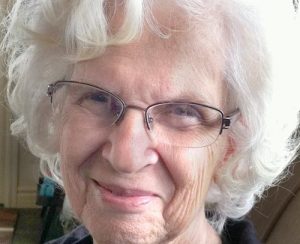 In the early morning of January 9, 2023, at the age of 88, Barbara Joan Segar journeyed from this world with an honor escort of angels. Family was present with her at her son’s home in Spartanburg, SC, as she drew her last breath. Everyone remembers her as having a godly and pure heart, a meek and mild manner, and a sense of humor accompanied by chuckles and a twinkle of her blue-gray eyes.

She was born on June 20, 1934, in Almont, MI, to Walter and Mabel (Muir) Currey. After graduating from Imlay City High School in 1952, she married Donald Edward Segar the following August at Trinity Baptist Church in Imlay City, MI. While rearing their five children, she supported Don in his many business and pastoral positions that moved the family around the country often, to locales like Bisbee, Arizona; Bridgeport and Ypsilanti, Michigan; Zanesville and Sandusky, Ohio; Aberdeen, South Dakota; and Macon, Georgia. As a pastor’s wife, she played the organ to accompany congregational singing, taught Sunday School and daily vacation Bible school classes, and recited memorized readings and poems. Whenever the church door was open, she was there. She was a dear child and sister; a loving and devoted wife, mother and friend; and a true servant to all.

Joan was preceded in death by her husband Donald.

Preceding her in death are her parents and all of her siblings – Phyllis Marie David, Doris Maxine Fritch Carnill, Max Donald Currey, Margaret Elaine Rocker, Katherine May Threllfall, and Beverly Jean Segar Crawford.

She loved march music, especially a rousing Sousa rendition. She also cherished hymns. Even when her mind was riddled with dementia, she could sing all four verses of songs she loved and played – word perfectly! On the eve before her final day, her lips still moved in an attempt to whisper lyrics.

Joan enjoyed playing the trombone and was fond of retelling a particular memory of her marching days in the Imlay City High School Marching Band. She lost her slide and had to run across the football field to retrieve it. The “brass boys” were greatly amused, but Joan was mortified!

In lieu of flowers, therefore, the family would appreciate donations to the Imlay City High School Band with the notation, “In honor of Joan Segar.” Mail them to 1001 Norlin Drive, Imlay City, MI 48444.

What a legacy she bequeaths! A 65-year marriage to her first and only love, a fierce-faithful love for her family and friends, and a testimony of a lifetime of service to anyone in need. The world is less without her sweet presence.

Her celebration of life service was held Saturday, January 14, 2023, at Henry M. Malburg Funeral Home in Romeo, MI. Interment followed at Scotch Settlement Cemetery in Almont, where she was laid to rest beside her parents.

Please be sure to sign the online register at henrymmalburg.com to share condolences and memories with the Segar family.