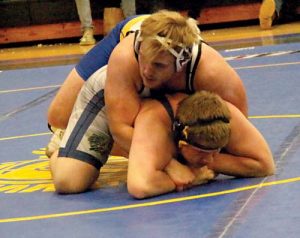 Latham Perry works for a fall in his 215-pound match versus Algonac last Friday.

Imlay City began their two-match stint with a 51-15 setback to Algonac.

Imlay City’s junior Dominic D’Ambrosio led with a win by pin. It took him 19 seconds to stop Gavin Bennett at 132 pounds.

Imlay City also squared off versus Armada later that evening, picking up a 44-28 triumph.

Caleb McClain (106) provided Imlay City with a victory by void.

Rojas and Dominic D’Ambrosio gave Imlay City triumphs by major decision. The former claimed a 9-0 win against Jasper Viviano at 126 pounds and the latter collected a 15-1 victory over 132-pound counterpart Evan Kannianen.

With the results, Imlay City now stands at 16-4 overall and 1-1 as far as BWAC clashes are concerned.