Capac drops a close one at home 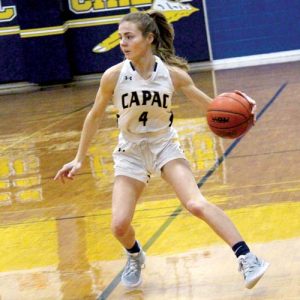 Julia Schaefer, of Capac, drives to the hoop in a game at home this past week.

With the decision, Capac now stands at 2-5 overall.

In Tuesday’s game, Capac and Owen-Gage finished the opening quarter with seven points each.

Capac then outscored Owen-Gage 9-2 over the next eight minutes of action, good for a 16-9 advantage at the half.

When the action resumed, Owen-Gage struck with a 10-8 third quarter edge. That trimmed their deficit to 24-19.

Owen-Gage then outscored Capac 10-3 from that point on, pulling out a 29-27 victory.