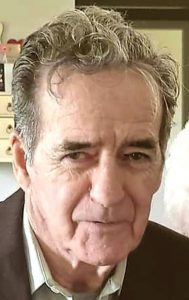 Thomas DuFour, age 84, of Imlay City, MI passed peacefully into Heaven on Wednesday, December 28, 2022, in the presence of his loved ones.

Tom was born October 10, 1938 in Manistique, MI. He was the son of the late Richard and Marie (Beaudry) DuFour. He attended Manistique Area Schools and graduated from the adult education program. On June 18, 1960, he married his sweetheart, Virginia Jenerou. Tom and Ginger celebrated their 62nd anniversary this past June. They spent many of their retirement years in the southern Florida communities of Marathon, Cape Coral, and Punta Gorda. He was preceded in death by his parents; his sister, Patricia Pedersen; and his brother, Gerry DuFour.

Tom accepted Christ as his Savior in the early 1960s while living in Marquette. He served in several churches over the decades, and most recently was a member of the Crossroads Baptist Church of Imlay City. He was known for his wit, practical jokes and good nature. He enjoyed children, the outdoors, chocolate and Roy Rogers. His love for children was demonstrated through his years of volunteer service in churches through camps, driving the church bus, Sunday school, and other children’s programs. In his retirement years, he was affectionately known by scores of children of all ages as Grampa. He generously distributed Smarties to all who came close enough to receive them from his hand. His pocket was never empty of this simple treat. He was intensely thoughtful to the needs of others and reached out to help in any way he could. He was especially beloved by his wife, his own children, grandchildren and great-grandchildren; to whom he was especially attentive. He took many opportunities to bless us all with his wisdom and resources.

Tom retired from the Inland Lime and Stone Company of Gulliver, MI. His amazing work ethic was displayed by the many hats he wore over the decades as a professional chef, railroad brakeman, construction worker, butcher, woods worker, garbage collector, and more. No job was beneath his best effort. He consistently reminded us that the most important part of any job was the last ten minutes.

A memorial service to celebrate his beautiful life will be held at Crossroads Baptist Church, 6835 Weyer Road, Imlay City, MI, on January 21, at 11 a.m. His son, Pastor Jeff DuFour, and grandson, Pastor Kendall DuFour, will be officiating.

Please be sure to sign the online register book at www.muirbrothersfh.com to share your memories and condolences with the DuFour family.