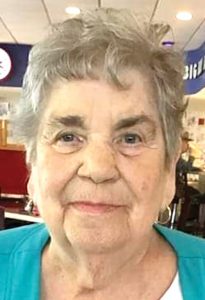 Susan Thomas, age 81, of East Tawas, MI, formerly of Marlette, MI, died Thursday, December 29, 2022 at Serenity Gardens Assisted Living of Imlay City, MI. Susan Jeanette Spencer was born May 9, 1941 in Salina, KS. She was the daughter of the late Lawrence and the late Sarah (Cook) Spencer. She grew up near Wayne, MI. She attended high school in Detroit and completed her nursing training through Wayne State University School of Nursing.

Susan married Ernest John Thomas on May 28, 1960 in Marlette, MI. Susan was a Registered Nurse and worked at Marlette Community Hospital briefly. She was a homemaker most of her life, raising their children.

Susan would regularly volunteer to assist the American Red Cross blood drives. They moved to East Tawas in 1989.

She was preceded in death by husband, Ernest Thomas; brothers, Roger Spencer and Ron Spencer; and her sister, Alice Talley.

There are currently no funeral service or celebration of life plans at this time.

Please be sure to sign the online register book at www.muirbrothersfh.com to share your memories and condolences with the Thomas family.