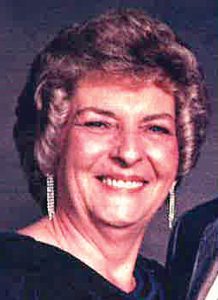 She was born in Capac, August 10, 1940, the daughter of the late Robert Stanley and Ida May (Meridith) McLean.

Her marriage to William “Bill” Joseph Kavanagh was October 27, 1962. in Emmett. Shirley was a 1958 Imlay City High School graduate and was a parishioner at Sacred Heart Church, Yale. After graduation. she had worked at the Vlasic Pickle Company in Imlay City. She later worked as a hi-lo driver for 27 years at L&L Products in Romeo where she was known as “Shipping Shirley” and retired from in 2003.

Shirley loved baking and was well known for her lemon meringue pies and pineapple upside down cakes, which she often donated to church dinners.

The family honored the memory of Shirley at the Rite of Christian Burial on Tuesday, December 27, 2022, at Sacred Heart Catholic Church, Yale. Fr. Tom Kuehnemund officiated. Inurnment will be in Our Lady of Mt. Carmel Kenockee Township Cemetery at a later date.

In lieu of flowers, memorials are suggested to McLaren Hospice or “Wishes of the Family.” For more information and Tribute Wall visit: kaatzfunerals.com