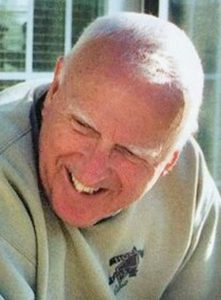 Robert Albert Martin died peacefully Dec. 20, 2022, at home surrounded by most of his family.

Bob was born Dec. 1, 1930, in Cheboygan MI to the late Albert J. Martin and Mabel Martin. After graduating from Eastern High School in Detroit, he enlisted in the U.S. Navy, and served honorably during the Korean War. He was proud to have been a part of the Navy’s football team. After an honorable discharge, he began a 35-year career as an engineer with General Motors where he touched many lives, and nurtured lifelong friendships. After retiring, he partnered with his high school friend and started a private consulting firm serving the automotive industry. Bob was an accomplished man both professionally, and personally. His hobbies included woodworking, golf, and competitive canoeing with his longtime friend Arv Mueller. An avid swimmer, he competed and medaled in many events, his specialty being the butterfly. As a Senior Olympian he competed well into his 80s. His mantra was always “I can teach anybody to swim!” He brought much joy to friends and family through his gift of music. He played the ukulele and banjo, and sang at countless St. Paddy Day events. He was a consummate joke teller, storyteller and embellisher.

Bob was preceded in death by his parents; stepmom, Hattie Martin (“Gramma Up North”); his sisters, Ruth, Patricia and Jackie; his wife, Patricia; and daughter-in-law, Nancy.

Cremation has taken place and no services are planned at this time.

Please share memories, condolences, and pictures with the family at www.jansenfuneralhome.com.