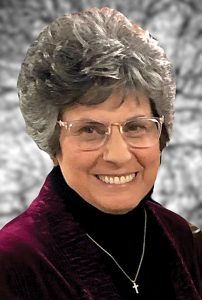 JoAnn Marie Cosentino was born July 24, 1941 in Chicago, IL. She was the daughter of the late James and the late Rose (Murabito) Cosentino. JoAnn married Arthur John Potts on December 5, 1959 in Chicago, IL. Many years later, JoAnn and Arthur moved their family to Phoenix, AZ where they resided for twenty years, after which they moved to Michigan and settled in Brown City. She was preceded in death by her husband of 60 years, Arthur, on February 2, 2020.

JoAnn was the owner of the Administrative Edge, a bill paying service in AZ, and employed the majority of her life in the banking field. Once in Michigan, JoAnn was the office manager of the Brown City Banner.

JoAnn was a past Brown City Rotarian, on the Brown City Planning Commission, and a member of the Brown City Council. JoAnn also volunteered as a Child Safety Counselor visiting temporary living facilities and answering urgent calls at her home for many years.

JoAnn was a strong, loving and devoted daughter, wife and mother who will forever be loved and remembered by her children and grandchildren as truly remarkable.

A private family gathering has been planned honoring JoAnn, her wishes and some of her favorite things.

Please be sure to sign the online register at www.muirbrothersfh.com to share condolences and memories with the family.