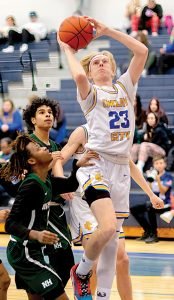 Imlay City’s JD Trout looks to score during a game earlier this season.

Ferndale High School is where the game was contested.

With the outcome, Detroit Old Redford moves to 3-2 overall. Imlay City slips to 3-4 this season.

In Wednesday’s game, Detroit Old Redford took a 10-7 edge after one quarter had ended.

Detroit Old Redford then outscored Imlay City 19-15 the rest of the way, putting the finishing touches on a 57-44 win.

Greg Pawlaczyk (11) plus Beau Hund and Zander Nash (10 each) led Imlay City with double digit points. The Spartans also had Matt Evans (nine) and JD Trout (four) contribute points to their cause.