IMLAY TWP. — When Steve and Debby Hoeksema decided to build their dream home in their hometown, neither of them dreamed it would lead to a lifetime of service in the township.

Such was the case in 1979, when Steve stopped in at the township hall to urge the supervisor and the board to enforce the township’s private road ordinance. When they declined to do so, Steve and his neighbor and friend, Mike Dodge, started attending meetings regularly hoping that things would change. They did not. And, Steve recalls, were quite blatant about it.

“After a few meetings one of the trustees said, ‘Why don’t you boys quit coming here, we aren’t going to do anything for you anyway,’” Steve says. “Well, I believe my temper was much worse back then so I said, ‘If that’s the way you’re going to be, I’ll have your job next election.’”

Turns out, he did. Though it was short notice and Steve was running as a write-in, in 1980 he earned a seat on the board. 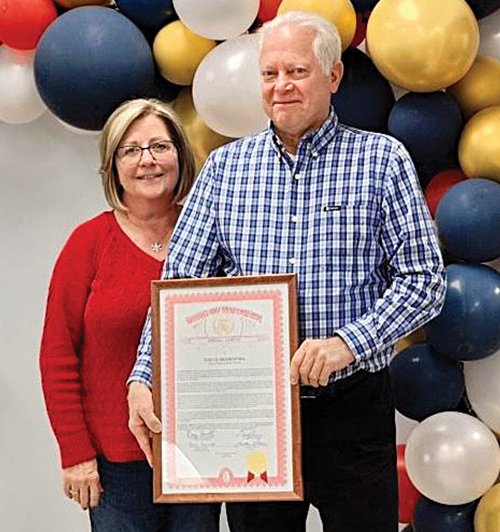 Four years later, Mike Dodge threw his hat in the ring, and became the board’s treasurer.

Mike has since moved to North Carolina. As for Steve, last week, he retired after 18 years as Township Supervisor, having been elected in 2004.

“We both ended up on the board as a result of our private road,” Steve recalls. “I had no idea what I was in for, I just know I didn’t like the answer I got and wanted to change things.”

When Steve became a trustee more than 40 years ago, the board held their meetings at the township library, located in downtown Imlay City.

The library became a district library, and the township donated all of their books and assets to the district library. In 1989 the Ruth Hughes Memorial District Library was built from a trust left by its namesake, an Imlay City native.

The township also acquired the property to build the new hall located on Fairgrounds Road.

Since Steve’s been at the helm, a park and splash pad have been created and installed adjacent to the township hall.

For a time, there was a recycling center for township residents to use. Steve says it was a good idea that had strong support, but it began to create concerns.

“The problem was residents of Imlay Township were paying for something that everyone in the surrounding communities were using,” he says. “If we had ten complaints in a week, nine of them were about the recycling bin.”

Residents were dismayed by the mess some would leave behind, Steve says, and often the bin was overflowing when residents tried to use it.

Township officials wanted to offer a recycling option for curbside trash pickup and recycling to residents, he adds, so a ballot proposal was created for the November election. It was defeated at the polls.

“The voters chose not to do that, so recycling has not come back,” he says.

While it’s not unusual for people to disagree about things, Steve says he feels extremely grateful that regardless of differing opinions, every board he’s worked with had the same thing in mind—making Imlay Township a great place to live.

“Maybe we didn’t always get our ideas approved, and yes there was disagreement, but at the end of the day the board always got along and made a board decision, not an individual decision,” Steve says.

“The fact that the boards got along is the reason for as many improvements in the township we enjoy. Everyone seemed to have the same goal; to make the township a better place.”

That common ground was helpful when big issues posed big challenges for the township. Steve remembers the proposed mobile home park and proposed John Carlo asphalt plant were among them.

“The asphalt plant was the most challenging,” he recalls. “It started in the late ’90s when Art Spies was supervisor and finally ended in 2004 after going all the way up to the Michigan Supreme Court.”

“You have to have strong zoning ordinances,” he says.

Over the 40-plus years Steve’s been involved in township government, things have changed. People have moved in and out, and growth continues as those who follow their dream to live in the country purchase property and build homes.

“I used to know where most residents lived but I can’t say that anymore,” Steve says. “But it’s also growing older, and the kids are no longer in school where you see their parents, and so you know less people. It’s just different.”

The friendships, however, have remained the same, he adds.

“I have made a lot of friends over the years and I’m very grateful for it,” he says. “What’s unique about Imlay Township is that we have people with a very wide range of ages on the township board. I think that made us unique.

“I haven’t always been the oldest one on the board so that’s kind of cool,” Steve continues. “Everyone contributes something different and it makes for a good board going in the right direction. There may be disagreement, but at the end of the day we’re moving forward.”

While some things will remain the same for Steve and his family, he’s looking forward to slowing down a bit.

Referring to himself as a “recovering vegetable farmer,” Steve will continue to grow corn, soybeans and wheat on his farm, which has a unique history of its own. His grandfather, Fred Hoeksema, father Warner Hoeksema and Uncle Lewis Jager founded the farm. Eventually, Steve and his cousin Randy Jager ran the farm. Steve became sole owner in 2013.

Steve also hopes to do a little traveling and enjoy more time with his family.

“I’m not going anywhere and there are no drastic changes in the near future,” he says. “But I am looking forward to having a little more free time.”

Steve was recognized for his contributions to the township at the December meeting, where Senator Kevin Daley presented him with a plaque of appreciation.

A strong family man, Steve followed in the footsteps of his grandfather, Fred, who served as township supervisor from 1966-1970. His father, Warner Hoeksema was Imlay City Fire Chief for about 20 years.

He and Debby have three grown children and five grandchildren. They continue to reside in their dream home in the township.

Rick Farkas will began his duties as Imlay Twp. supervisor this week. His term will run to 2024.