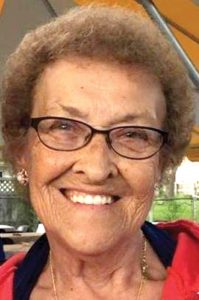 She married Bernard “Bud” Hale on September 11, 1953 in Troy, MI. She was preceded in death by Bud on April 25, 1994. Betty and Bud had moved to live in Attica in 1971. Over the years, Betty worked as a bank loan officer, at Ryckles Chemical Co., and as a clerk at Bee Gee Shoes in Imlay City. She was mostly a homemaker, raising her children. She was a long-time member of the Imlay City/Attica Order of the Eastern Stars.

Betty is survived by her daughters, Linda (Robert) Tanis of Imlay City, MI, Lisa (Chris) Warford of Attica, MI; her son, Daniel (Cheryl) Hale of Imlay City, MI; nine grandchildren; and 18 great-grandchildren. She was preceded in death by her husband, Bud, on April 25, 1994; her parents; eleven brothers and sisters.

Please be sure to sign the online register book at www.muirbrothersfh.com to share your memories and condolences with the Hale family.