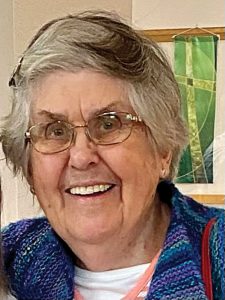 A memorial service will be held on Tuesday, January 3rd at St. Paul Lutheran, Imlay City. Visitation is from 9:30 a.m. – 11:00 a.m. preceding a service from 11:00 a.m. – noon. Lunch will be served immediately following the service at the church.

Mabel was born at St. Joseph Hospital in Mt. Clemens on September 6th, 1931, the first child of the late Frederick & Ella Schroeder of Utica. Growing up in the suburban Detroit of the Great Depression & World War II, Mabel developed a lifelong passion for family, the Lutheran Church, Education, Girl Scouting, swimming, and the outdoors.

Mabel graduated from Roseville High School in 1949 after 4 years of perfect attendance and then attended Wayne State University where she earned a bachelor’s and later a master’s degree in Education.

In 1960, Mabel married the love of her life, Aris L. Anglin (A.L.) of Vardaman, MS who had courted her for several years after meeting at a USO-Club Square-Dance while Mr. Anglin was serving in the US Air Force and stationed at Selfridge Air Base.

Mabel and Aris made their home in Shelby Township where they were founding members of Faith Lutheran Church. Mabel was a physical education teacher in Detroit Public Schools and Aris was a supervisor at TRW. They loved to camp & travel often to Northern Michigan and the Anglin Family Farm in Mississippi. They also enjoyed a driving/camping adventure to Alaska among other locations in the continental United States.

In 1971, Mabel & A.L. welcomed their only child, Heidi and in 1976 moved to a centennial farmstead in Dryden where they all enjoyed a rural lifestyle and began for Heidi a life-long love for horses when her father won a two-year-old Appaloosa that he brought home to her and was part of her life for 36 years.

A.L. passed away suddenly in 1979 and Mabel continued caring for Heidi on their farmstead and returned to teaching as a full-time substitute in the Imlay City, Dryden, and Almont schools.

Mabel continued to travel with Heidi and later with Lutheran friends visiting many countries including Ireland, England, Germany, Italy, Israel, Egypt, Jordan, and China. Particularly memorable for her and Heidi was hiking to the top of Mt. Sinai to witness the sunrise, Oberammergau in Germany and seeing buffalo herds in North Dakota.

Mabel was a lifelong member of the Lutheran ELCA church and taught Sunday School at St. Paul Lutheran for 55 years. She continued as a Girl Scout leader and trainer for over 30 years as a life member supporting troops. She was devoted to her family and her retirement years were enriched by the time spent with her three granddaughters whom she watched 3 days a week for 13 years

Mabel is survived by her daughter Heidi (Timothy) Magyar and Granddaughters Alyssa, Kathryn and Samantha of Laingsburg, MI. She is also survived by her Brother Charles A. (Carol) Schroeder of New Baltimore, MI.

Anyone who knew Mabel can recall four things she would almost certainly share with anyone she would meet: She was a physical education teacher who taught in Detroit for 17 years, She rode her exercise bike every day for over 25 years, She never drank, smoked, or stayed out late and that she knitted over 150 baby blankets for her Church to donate through several nonprofits that provided them to infants, foster children, or long-term care facilities.

For those of us closest to her, Mabel’s anecdotes provide important lessons that we will carry forward, do what you love, take care of yourself, and give of your time and talent.
We love you Mom.

In Lieu of flowers, Memorial contributions may be made to St. Paul Lutheran Church in Imlay City, MI and/or Girl Scouts Heart of Michigan in memory of “Mabel Anglin Unite 321”