IMLAY CITY — In with the new and out with the old, the saying goes. Still, as the clock winds down on 2022, some things remain constant in the Tri-City area, while others march along with Father Time into a new beginning.

Twenty-twenty-two, like the years before it, brought stories of both joys and sorrows, history and progress to our pages.

Though the holidays bring joy to families everywhere, there was no joy when a major winter storm secured an icy grip on the state and much of the country.

A rather unwelcome “gift” just before Christmas, the storm brought blizzard warnings to parts of the state and winter weather advisories and warnings to the Tri-City area through Christmas Day.

Preceded by rain on Dec. 22, the storm brought with it temperatures in the single digits and wind gusts up to 55 miles an hour. Some residents north of Imlay City temporarily lost power on Dec. 23. Blowing snow made for treacherous driving conditions, and many cancelled or postponed their Christmas Eve plans.

By Monday, winds diminished, temperatures rose to the double digits, and most major roadways were clear. 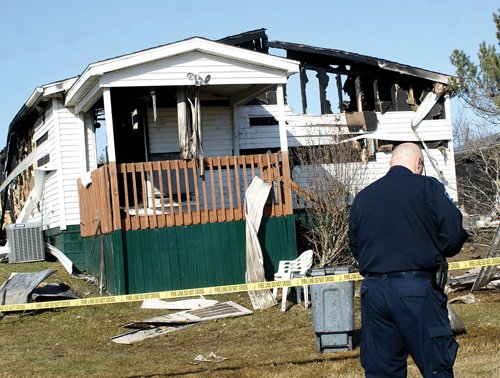 A Michigan State Police fire investigator works on the scene of a fatal explosion and fire that occurred on March 21 in the Village of Dryden.

Here’s a look at the other stories and events that shaped the year:

What began as ballot language to amend Imlay City’s charter to allow for the sale of medical marijuana by the Lapeer County Cares Coalition resulted in a close victory at the polls in November to do just that. The proposal passed 644 to 599.

City officials have since worked diligently to comply with the proposal, and last week approved updated zoning ordinances allowing for the establishment of eight medical marijuana establishments.

Another story that had a big impact on Imlay City, Almont and surrounding communities happened in August, when a break in a 120-inch water main was discovered in St. Clair County.

A “boil water” advisory was issued on August 13, and expected to last for at least two weeks. During that time, area residents lined up at the Eastern Michigan State Fairground, where volunteers handed out bottled water. The advisory was lifted on August 20. Final repairs were completed in October.

There was a bright spot just a month before the advisory was issued when a 98-year-old female resident of Imlay City’s Bancroft Street senior apartments was trapped in the building’s elevator due to downed power lines.

It was around 7 p.m. on July 5 when Imlay City firefighters were dispatched to the Parkview Apartments to rescue the resident.

Firefighters pried open the elevator doors and the trapped woman was able to crawl through the opening. Lapeer County EMS personnel helped assist the woman, and after checking her over, found no injuries.

Things weren’t so sunny in Goodland Township, when the planning commission on June 11 voted 5 to 1 to deny a request from Orion Renewable Energy to install a 1,600 acre-plus solar facility on farmland in the township.

Before the vote, residents both in favor of and opposed to the proposal packed township board meetings to state their thoughts on the matter.

Although some board members had differing opinions about each topic, they were nearly united in their belief that the size and location of the 1,639 acre project was not in harmony with Goodland Township’s mostly agriculture setting.

A month earlier, most agreed that it was great news when Almont, Capac, Imlay City and Dryden school districts returned to indoor awards ceremonies and graduation events. The COVID-19 pandemic of 2020 forced schools to move such events outdoors or online.

A somber mood gripped the community in March, as an explosion at Victoria Meadows mobile home park in Dryden claimed the lives of four people.

Dryden Township police and firefighters were dispatched to the scene around 5 a.m. on March 21. The mobile home was fully engulfed in flames upon their arrival. Almont firefighters also assisted. The bodies were later discovered inside the home.

After an investigation, officials believed the fire was intentionally set by one of the victims, Candice Turton, 39. Also killed were Nathan Young, 15, and his sister Kylie Young, 17. Eighty-seven-year-old Zola Rogers was also killed in the incident.

History did repeat itself as the year wound down when a semi-truck struck the railroad viaduct at the intersection of Van Dyke (M-53 and Third Street.

The almost annual event happened on Nov. 22, when a northbound semi carrying scrap graded the bottom of the 13-foot overpass, spilling debris along the roadway.

Traffic was snarled in the area and Imlay City police rerouted traffic. The intersection was shut down for about two-and-a-half hours as cleanup crews cleared the scene.