IMLAY CITY — On Saturday, Dec. 10, the Imlay City Eagles #4082 aerie, auxiliary and Eagle Riders made a trio of donations to various local causes. 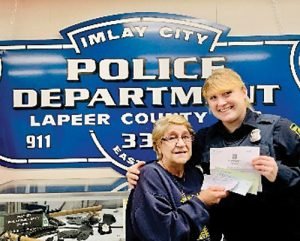 Among the recipients of the Eagles’ support was the Imlay City Police Department, whose check was presented by event chairperson, Betty Rozek.

Woodruff, who manages Imlay City’s Heatherton Place Assisted Living facility, was representing ‘Audrey’s Angels,’ an organization whose mission is to enrich the lives of the elderly living in small group homes through live music.

“We appreciate everyone’s time and donations and thank all those who attended our event,” Rozek concluded.

The generosity did not end there. In keeping with the holiday spirit, last Wednesday and Thursday (Dec. 21-22) Eagles members filled and distributed food baskets to local families experiencing hardship, along with Christmas gifts for their children.

“We could not have done this without everyone’s help and participation,” Rozek said. “We want to thank everyone that donated money, food, gifts, hats and gloves to those needing them.” She added that remaining hats and gloves will be donated to local schools.

“Thank you also to our grocery shoppers, who loaded up six carts full of food,” she continued. “Special thanks to our Chairperson Betty Rozek, Denese Shipman, Kelly Nagy Cramer, Ruby Rutherford, Pat Hunter Arnaud and Zoey and Betty Mason.

“Again, it has been a big success.