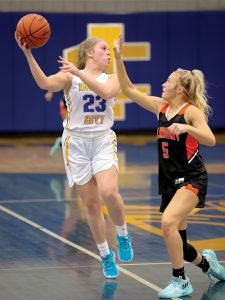 In Thursday’s clash, Imlay City grabbed an 8-5 edge after one quarter was complete.

The next eight minutes of action saw Imlay City net eight points and Almont manage seven, good for a 16-12 advantage at the halftime break.

When the action resumed, Imlay City established some much-needed breathing room. Aided by a 20-9 third quarter edge, the Spartans went ahead 36-21 with 24 minutes gone.

Imlay City then outscored Almont 14-11 from that point on, assuring themselves of a 50-32 win at night’s end.