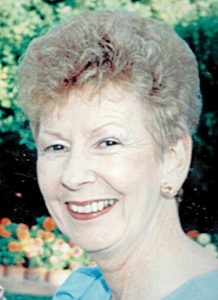 Marlene M. (nee Schlusler) Mallia, a lifetime resident of Leonard, passed away December 14, 2022 peacefully surrounded by her loving family. She was born December 29, 1935 in Leonard, the daughter of Burnell J. and Mildred E. (Church) Schlusler. Marlene graduated from Almont High School in 1953 and then attended St. Joseph Nursing School in Pontiac. She first worked for Doctor Bishop in Almont and then Almont Community Hospital and then ending her nursing career at Crittenton Hospital in Rochester. Marlene married her beloved husband, Eugene Mallia, on March 19, 1955 at the Leonard Methodist, where she was a life member. She was the first female firefighter on the Addison Twp. Fire Department, where she served for 25 years. On Nov. 12, 1997, The Oxford Leader reported she retired on Oct. 31 of that year. Reported the article, “Mallia’s most satisfying experience with the fire department was delivering babies. ‘I’ve delivered four babies . . . But every run has its satisfactions, especially if it goes well.’” Marlene was a dedicated firefighter and paramedic, over the years she delivered 22 babies and directed the Fire Department involvement with the Strawberry Festival. She assisted in writing the Fire & Rescue procedures and protocols for Oakland County with the assistance of local physicians. Current Addison Township Fire Chief Jerry Morawski joined the department in 1994. He said, while he was young then when they were both on the department, he knows much of the success of the department’s ambulance service is based on her dedication to the program. “She was a nice lady,” he said. “She was always in that ambulance ready to go, no matter what time of day or night.” On Sept. 29, 1982, The Leader reported she had been an ambulance volunteer for “ten years.” “She was pretty instrumental in our ambulance service back then,” Morawski said. “I know without her dedication and willingness to move the department forward, a lot of what we (the Addison Township Fire Department) have accomplished to present day wouldn’t have happened. To give you an idea, we started transporting years ago and she helped start that program and continued with it. We started with basic transport – where two EMTs could transport. It wasn’t until 2002 we started ALS transportation – that’s when everyone else around here, Oxford, Oakland, anybody in this north end started transporting – we were already transporting and she was a big part of that. I would have to say, where we’re at today was because Marlene was a very influential person. She put us on the right road to transporting ALS, which is what we’re doing now.” Morawski said in her honor, the department will retro-fit an ambulance to transport her casket from Muir Funeral Home & Celebration of Life Center in Imlay City to Lakeville Cemetery for interment this Saturday. They will have a fire engine at the cemetery and perform a “little ceremony.”

She supported her husband Geno’s military service being an active member of the American Legion Auxiliary member, Post #108. She and her husband started the Lakeville Cemetery Auxiliary and the Memorial Day annual event. Over the years they turned Lakeville Cemetery into a beautiful place. They erected a gazebo, put in new fencing, street signage and fixed many old cemetery memorials that had broken and tipped over. She and her husband were avid travelers and over the years, they had been to seven continents. A few of the favorite destinations included Fiji, Italy and the Panama Canal. They also shared a sailboat with the Reeves family and sailed it from Caseville to North Carolina. Marlene loved her yard on Elmwood where she grew over 30 varieties of roses and vegetables. Most recently she has attended Dryden Methodist Church. Marlene loved her beloved Leonard and was involved with making it a better place through her voluntarism. She was known for her generosity and warm smile and shall be missed by many.

She was preceded in death by her parents; and siblings, Lillian Wright, Julia Mills, Lucille Porter, Michael Schlusler, Burton Baza and Bucky Baza.

A memorial procession was made to Lakeville Cemetery with an Addison Twp. Fire Department escort.

Memorial donations may be made to Addison Twp. Fire Department in Marlene’s honor.

Please share a fond memory or a loving photo on Marlene’s memorial page at www.muirfh.com.