Dryden picks up a win over Capac 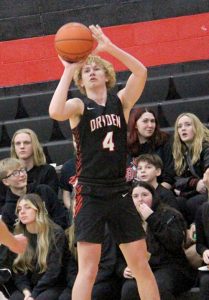 Dryden’s Dorian Lewis looks to connect on a shot versus Capac last week.

With the outcome, Dryden moves to 1-3 overall. Capac falls to 1-4 this season.

In Friday’s matchup, Dryden bolted out to a 20-4 advantage after one quarter was done.

The middle two quarters saw Dryden continue to pull away. Aided by a 32-22 edge there, the Cardinals increased their cushion to 52-26 with 24 minutes gone.