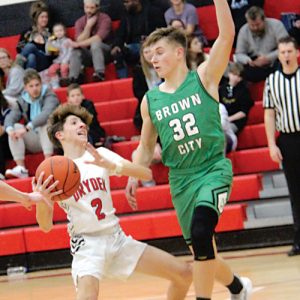 Dryden’s Sonny Coscione looks to score in the title game versus Brown City.

DRYDEN — Gaden Muxlow rebounded his own missed foul shot for a basket as time expired, lifting Brown City’s varsity basketball team to a 41-40 victory over host Dryden in the championship game of the Paul Grondin Classic last Saturday night.

Muxlow would finish the contest with a 37-point performance.

With the decision, Brown City moves to 4-1 overall. Dryden slips to 1-4 this season.

“That was a tough way to lose,” Dryden Coach John DelCampo commented. “However, we had our chances to put the game away in the last couple minutes of the game and did not execute,” he noted.

In Saturday’s clash, Dryden and Brown City concluded the first quarter with 13 points each.

Dryden followed it up with a 9-8 second quarter edge, good for a 22-21 advantage at the half.

When the action resumed, Brown City countered with an 11-7 third quarter edge. That left them up 32-29 with 24 minutes gone.

Dryden then put together an 11-9 fourth quarter rally, only to drop a 41-40 nailbiter.