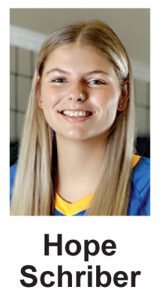 Schriber provided Imlay City with 289 kills during the 2022 campaign.

It took her 118 sets to amass those numbers.

Schriber, who has signed with Madonna, also finished the 2022 campaign as a Tri-City Times All-Area and All-Blue Water Area Conference first team choice and an All-Region pick.