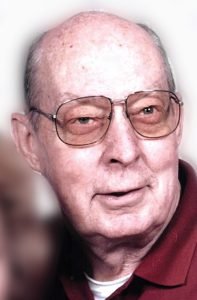 Larry Maynard Schrader, 92, of Capac, passed away Thursday, December 8, 2022, at The Orchards of Armada.

He was born May 19, 1930, in Walled Lake, MI, the son of the late William Albert and Myrtle Lillian (Bench) Schrader.

His marriage to Barbara Anne Briggs was October 11, 1958, at St. Lawrence Catholic Church, Utica. They spent 50 beautiful years together before Barbara’s passing April 28, 2008.

Larry served our country in the United States Army on the front lines of the Korean War as a field medic. In 1964, Larry and his wife Barbara opened Schrader’s Upholstery in Capac.

The family honors the memory of Larry and invites you to visit and share memories Friday, December 16, 2022, from 4-8 p.m. at Kaatz Funeral Directors, Capac. Funeral services will begin at 6 p.m. Rev. Lisa Clark, pastor of Capac United Methodist Church, will officiate.

Memorials are suggested to McLaren Hospice and Veterans Administration.