Local resident is recognized for black willow on property 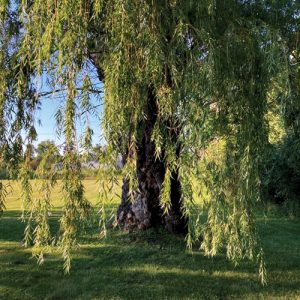 This black willow tree on Imlay City resident Eli Greenman’s property is deemed to be the largest in Lapeer County.

The giant black willow on Greenman’s property was measured to have a circumference of 108.5 inches.

The award recipient was feted at this year’s Big Tree Hunt held at the Chippewa Nature Center in Midland.

More than 650 entries were submitted by Michigan residents from 79 of Michigan’s 83 counties.

The winning entries were subject to on-site verification by professional arborists and foresters.

“I visited Eli’s tree on a tree verifying adventure across seven counties,” Forintos said. “Eli’s tree was the biggest nominated in Lapeer county and won! Eli and family even came to our awards ceremony to represent Lapeer county’s biggest tree.

“The connection between each person and their tree, or trees in general, is clearly strong and meaningful,” she concluded.

For information about ReLeaf Michigan, call 517-507-1533 or email bigtreehunt@releafmichigan.org