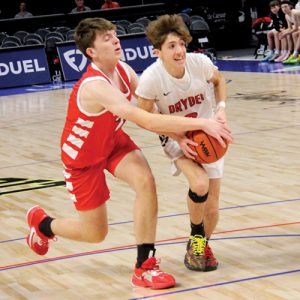 Dryden’s Sonny Coscione is pressured bringing the ball up the floor versus Millington at Little Caesars Arena in Detroit.

Little Caesars Arena, in Detroit, is where the action unfolded.

With the decision, Dryden slips to 0-3 this season.

“It was a great experience for our entire community,” Dryden Coach John Delcampo said. “Obviously we wish the result was better but it is something they will remember for the rest of their lives,” he noted.

In Sunday’s confrontation, Millington jumped out to a 21-17 advantage after one quarter was complete.

Quarter two saw Millington amass 18 points and Dryden generate 13, good for a 39-30 lead at the half.

When the action resumed, Millington picked up right where it left off. Aided by a 16-11 third quarter edge, they were able to increase their cushion to 55-41 with 24 minutes gone.

Millington then outscored Dryden 18-17 from that point on, assuring themselves of a 73-58 triumph at night’s end.