Spartans move to 3-0 on season 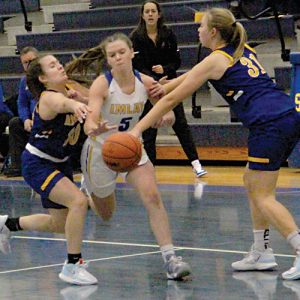 With the outcome, Imlay City moves to 3-0 overall.

In Monday’s confrontation, Imlay City and Marian ended the opening quarter with 10 points each.

When the action resumed, Imlay City struck with a 16-9 third quarter edge. That staked them to a 34-28 advantage at the time.

The final quarter would see both sides hit for 12 points, giving Imlay City a 46-40 win at night’s end.

For Imlay City, Brie Hund led the way with 16 points. She drained four triples along the way.

Imlay City had five other players reach the scoring column. Their ranks consisted of Lexa Forti (12 points, including a trifecta), Natalie Stone (nine), Makayla Bruman (a trey) along with Alyssa Evans, Lily Lengemann and Chloe Bruman (two each).