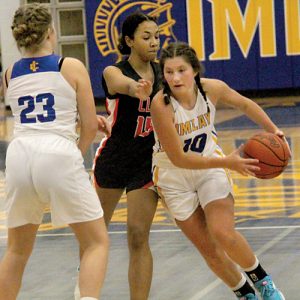 Imlay City’s Lily Lengemann is pressured by a Clio defender during their non-league encounter this past week.

With the decision, Imlay City improves to 1-0 this season.

In Thursday’s meeting, Imlay City jumped out to a 12-5 advantage after one quarter was over with.

The second quarter saw Imlay City net 12 points and Clio manage 10, leaving them up 24-15 at the half.

When the action resumed, Imlay City struck with an 11-9 third quarter edge. That increased their cushion to 35-24 with 24 minutes gone.

Clio then put together a 14-13 fourth quarter rally, only to fall 48-38 when the final buzzer sounded.