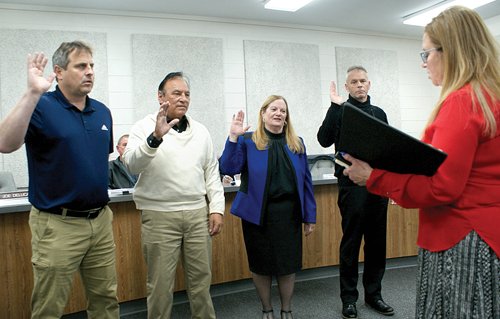 The new commission’s first order of business was to elect a new mayor and mayor pro-tem.

Joi Kempf was re-elected mayor by a 5-2 margin, with Joe DeLuca and Al Ramirez casting no votes.

Commissioner Ted Sadler was elected to serve as Mayor pro-tem by a 5-2 margin, with Commissioners Deluca and Ramirez opposed.

Commissioners unanimously agreed (7-0) to apply for disaster assistance funds from the State of Michigan related to costs incurred due to the water line break that affected numerous local communities, including Imlay City.

In another matter, City Attorney Bob Siebert and City Planner Kelly McIntyre were in attendance to discuss the potential impact of the passage of a marijuana initiative on the Nov. 8 election ballot.

Siebert recommended that the city postpone discussion and proposed changes to the city’s zoning ordinance and zoning map until the city’s next regular meeting on Tuesday, Dec. 20.

Before concluding the meeting, the newly-elected and current commissioners offered some personal comments.

Al Ramirez acknowledged all nine candidates that ran for the four open city commission seats in the recent election. Joe DeLuca also thanked residents for their support in the election.

Mayor Kempf and Commissioners Bob Tanis and Ted Sadler offered their congratulations to the winners.