Belle Valley Band to warm up the season 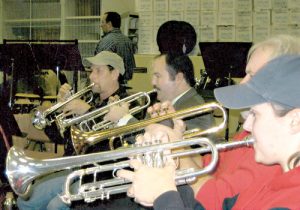 The Belle Valley Community Band’s brass section is comprised of some of the best musicians performing in Lapeer County and the entire region.

IMLAY CITY — The Belle Valley Community Band (BVCB) celebrates the holiday season with a presentation of “Winter Wonderland – A Season of Traditions” at the Imlay City High School gymnasium at 3 p.m. on Sunday, Dec. 11.

He adds that this year’s concert will also include an “old-fashioned” sing-along to involve audience members.

The Dec. 11 concert will feature a trio of conductors, to include Dave Coon, Christine Dodge and Steve Burns.

Among the musical selections are Christmas March by Edwin Franko Goldman; Lux Aurumque by Eric Whitacre; 12 Days of Christmas by Jerry H. Bilik; Sleigh Ride by Lero Anderson; Polar Express by Alan Silvestri and Glen Ballard; Laughing All the Way by Jaimes Pierpont; and White Christmas by Irving Berlin.