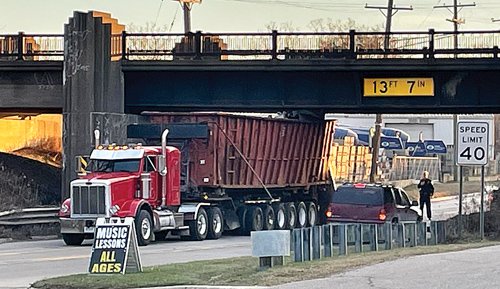 The busy intersection had to be shut down and traffic diverted to alternate routes for more than two hours Tuesday afternoon.

IMLAY CITY — About once a year Imlay City police can count on a semi-truck striking the railroad viaduct at the intersection of Van Dyke (M-53) and Third Street.

It happened again around 4:30 p.m. on Tuesday, Nov. 22, when a northbound semi carrying scrap grazed the bottom of the 13-foot, 7-inch overpass, spilling debris across the roadway.

Police Chief Brett Selby said the intersection was shut down for about two-and-a-half hours for cleanup crews to clear the scene.

Selby noted that it was the truck’s load that came in contact with the viaduct, and not the truck itself.

He added there was no structural damage and that the viaduct remains structurally sound.

Imlay City Police reported that the semi driver was not injured, but was ticketed for various infractions.