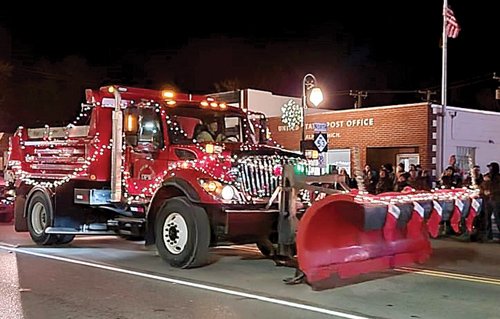 Snow will be no obstacle for this parade entry featured at a previous Holly Day Light Parade in downtown Almont. This year’s parade on Saturday, Dec 3, is scheduled to begin at 7 p.m.

Before the parade, all are invited to the “four corners,” for a warming fire and a seasonal performance by Almont High School Choir members.

Additionally, many downtown businesses will remain open for customers before and after the parade.

The doors of the Almont Historical Museum will also be open for children’s crafts and Christmas decorating.

Most in the crowd will seek out various vantage points for a closer view of Santa Claus, who will be lighting the tall tree at the northwest corner of Main and W. St. Clair streets after the parade.

Santa is expected to be available to hear children’s Christmas wishes both before and after the parade.

The parade lineup will begin forming at 6 p.m. along North Street by the Almont Car Wash.