Anonymous patron picks up tab for everyone in restaurant

IMLAY CITY — Thanksgiving Day or not, it seems generosity knows no season at the Silver Grill on Cedar Street.

Since opening the restaurant almost 30 years ago, owners Krume and Diane Gavrilovski have witnessed first-hand the generosity of their customers.

Hardly a day goes by without at least one patron secretly springing for another’s meal—or covers the bill for a couple or a group sitting at a table.

Recently the Gavrilovskis and their staff witnessed that generosity kicked up a notch—and provided a perfect kickoff to this year’s season of giving.

An unfamiliar customer stopped in for a bite and picked up the tab for every patron in the restaurant. It was a remarkable and heartwarming surprise, Diane says. 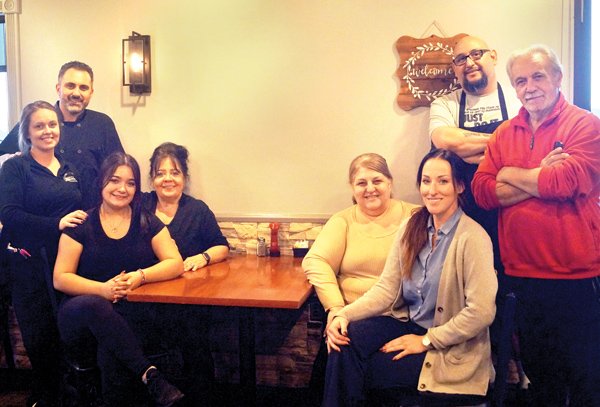 Generosity is served up family-style at the Silver Grill in Imlay City. Staff members (back) Anthony Gavrilovski, Nicholas Atkinson and owner Krume Gavrilovski, (front) Shay Palermo, Perla Vargas, Josie Edwards, owner Diane Gavrilovski and Jen Lukaszewski are grateful to the anonymous patron who picked up the tab for the entire restaurant earlier this month.

“I was in the back working when one of the servers came to me and said ‘a customer wants to pay everybody’s bill in the restaurant,’” she says.

Along with the server, Diane was floored. After making sure she heard correctly—and confirmed the customer’s intent—Diane devised a way to facilitate his request.

“I didn’t want him to have to pay each bill individually, so I had the girls combine all the tickets into one ticket,” she says.

As the customer reached for his credit card, Diane asked if he’d like her to announce his generous gesture to the patrons in the restaurant. The big-hearted man humbly declined.

“He said no, please wait until after I leave,” Diane says. “He did make sure to say ‘please tell whoever is a veteran here today ‘thank you for your service,’ and then he left.”

Diane and the staff working that day hadn’t recalled seeing the man before—though he was memorable in more ways than one.

“He was younger and professional looking, and carried himself well,” Diane says. “He was handsome, too,” she adds with a grin.

Along with covering the $300-plus bill, the man left a $100 tip for all three of the servers to share.

“It was so humbling, so warming and just so touching,” Diane says. “The customers were just amazed. They expressed so much gratitude. Some couldn’t believe it and wanted to make sure he meant to pay for everybody’s bill.”

While the Gavrilovskis and Silver Grill staff hasn’t seen the generous man since, the sharing and caring atmosphere at the Silver Grill remains.

“It’s like family here,” says server Josie Edwards. “I’ve worked in a lot of places and I’ve never seen anyone pick up tabs the way I see it here. It was amazing to see someone pay for everyone in the whole restaurant.”