IMLAY CITY — Staff members at the Ruth Hughes Memorial District Library have been turning the page to the holiday season.

To celebrate the holidays, Library Director Tracy Aldrich is inviting everyone to stop in and share in the spirit of giving and goodwill toward others. 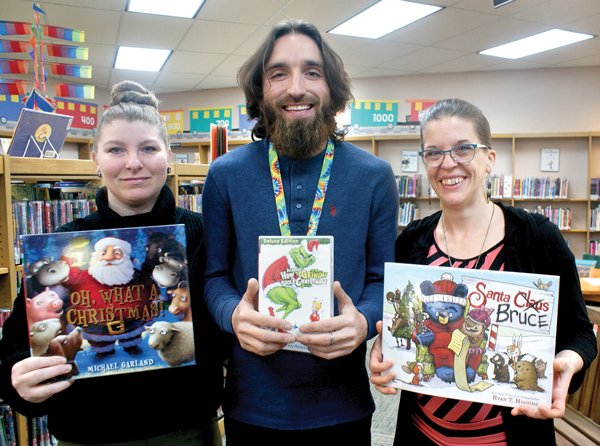 Ruth Hughes Library staffers Lisa Cox, Danny Nacker and Lorry Traver pose with some of the many children’s books available to children during the upcoming holiday season.

“Join us for lots of festive family fun,” says Aldrich. “We’ll be having Christmas crafts and gift-making workshops — and a special way for children to mail their letters to Santa Claus.”

“After all those Christmas cookies, it will be time to focus on our personal wellness again,” Aldrich said. “Some of the wellness events we have planned include a beginner’s yoga and meditation series, as well as a healthy snack-making class for the kids.”

The yoga and meditation classes will by conducted by 2014 Imlay City High School graduate, Danny Nacker,

Nacker is a certified yoga instructor with a Bachelor of Science degree from Lake Superior State University and a Master’s of Psychological Research from the University of Edinburgh in Scotland.

During the past week, Nacker joined fellow Ruth Hughes staffers Lorry Traver and Lisa Cox in picking out some Christmas reading materials for children stopping in during the holiday season.