A member of Troop #128 of Almont, Troy said he had been reaching out to the community to find a project worthy of dedicating his Eagle Scout project.

“When I was originally looking for a project, it came to my attention that the Lions club was in need of a memorial,” Troy said. “Because of the important role of the Lions club in the community, I thought it would be a good idea to not just honor past Lions presidents, but to recognize all Almont Lions club members.” 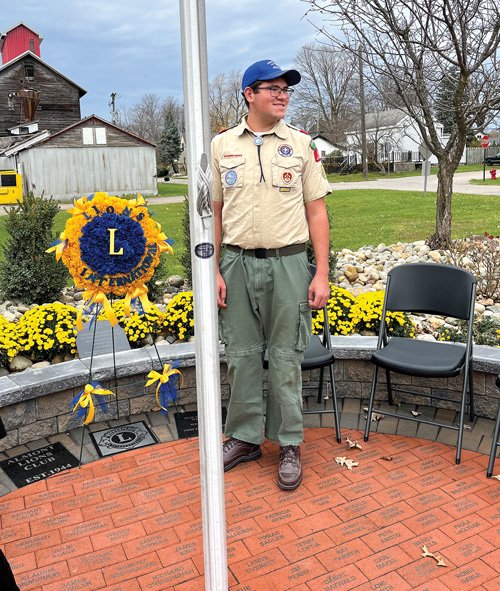 It was with that goal in mind that Troy recently transformed a small berm behind the Lions Hall into a garden that includes a retaining wall and an engraved brick walkway that features the names of each and every Almont Lion, both past and present.

The memorial itself surrounds the flagpole behind the hall, which flies both the American flag and the Lions International flag.

Speaking on behalf of the Almont Lions club, spokesperson Bernie Calka said Troy benefitted from widespread support from the community.

“To help purchase the needed supplies and materials for the project, Troy was the recipient of a donation from the Four County Community Foundation (4CCF),” Calka noted.

He added that Troy also received on-site construction assistance from some 4CCF board members who brought along their own shovels and wheelbarrows to assist.

“Funds from the 4CCF’s ‘Karyn Beth Wranosky Memorial Fund’ were also used to help pay for the costs,” Calka said.

He added that several fellow Scouts, some Lions members, and Troy’s family and friends lent their hands to the project.

“This memorial is not only to beautify the Almont Lions Hall, but is a way to give back and recognize all the Lions members over the past 78 years, for all they have done for this community.”

On behalf of the Almont Lions Club, Calka acknowledged Troy for his hard work and dedication for creating what will be an enduring memorial in tribute to many people.

“On behalf of the Lions club,” Calka said, “I would like to thank Troy and all those who made donations or were involved in the design and construction of this memorial.”