IMLAY CITY — Jake Newton didn’t have to look far for inspiration on how to shape his life.

His dad—also named Jake Newton—and his grandfather Jack Hartel walked the walk when it came to integrity, honesty, discipline and doing the right thing in all areas of life. Both Marines, Jake admired they way they conducted themselves. From the time he was a little kid, Jake knew he wanted to be just like them.

Jake also looked to his neighbor, Lynn Walton, a longtime farmer and helicopter pilot who sparked a passion for flying that he couldn’t ignore.

“I grew up flying with him in his helicopter, which gave me a love for flying,” Jake says.

From a young age, Jake learned that melding his passions—to become a Marine and to be a pilot—was possible. His dad outlined the path.

“He said you can be a pilot in the Marine Corps, but you have to be a commissioned officer to become one,” Jake says. “So that’s what I set out to do.” 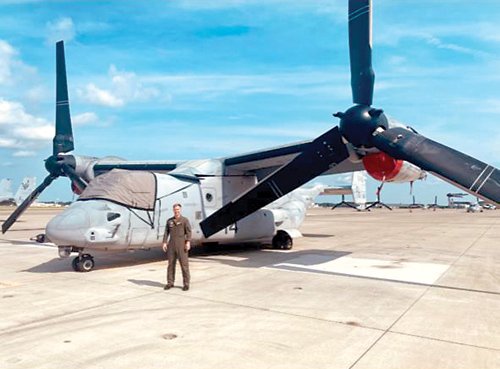 Marine Corps Capt. Jake Newton in his flight suit in front of the MV-22 Osprey he commands.

After graduating from Imlay City High School in 2013, Jake earned a Bachelor’s degree in Homeland Security from Oakland University. He was commissioned into the Marine Corps in May of 2017, and earned his wings in September of 2020.

Jake flies an MV-22 Osprey, a unique, multi-mission aircraft capable of vertical takeoff and landing, and short takeoff and landing capabilities. The Osprey combines the functionality of a helicopter with the long-range, high-speed performance of a turboprop plane.

“For the Marine Corps, it allows us to attack the beach from farther out in the ocean,” Jake says. “It can go farther than a helicopter and a lot faster, too. It has its advantages.”

Recently, the 27-year-old Captain experienced those advantages firsthand on his inaugural deployment in the Baltic Sea on the U.S.S. Kearsarge.

Their mission was to reinforce relationships with U.S. partners in the Baltic region, as well as project U.S. military power to adversaries in the region.

The seven month deployment included stops in Norway, Sweden, Latvia, Lithuania, Poland and other countries in the region. They were warmly received.

“All of the people were very appreciative that we were there, and said they felt safer with the U.S.S. Kearsarge in the Baltic sea—which is basically Russia’s back door,” Jake says. “It felt good to be there with the people, helping them when their futures felt uncertain.”

The uncertainty proved to be a challenge for Jake and the crew.

“It was difficult not knowing what the next day held,” he says. “We spent lots of time planning different scenarios but never sharing them.”

“Basically it shows how healthy the aircraft are and how qualified the pilots are from a training perspective,” Jake says.

In his downtime, Jake and many others on the ship watched “Whitetail Adrenaline” DVDs, sent to him by longtime friend Alan Nelson, also of Imlay City.

The video series features the highs and lows, ups and downs of everyday “do-it-yourself” hunters encounter during hunting season.

“It was a hit with the guys on the ship,” Jake says.

While he was gratified to be deployed on a mission that made people in the region feel more secure, Jake counted the days until he could return to U.S. soil, particularly to his beloved wife Erika (Garant) Newton and his family and friends. He also looked forward to some good, old-fashioned home cooking.

Jake enjoyed all of that and more last week during a ‘Welcome Home’ party at his boyhood home in Imlay City. Prior to that, he and Erika took a week off together to hike in the Appalachian Mountains with their dogs.

While his job as a Marine Corps Captain and MV-22 Osprey pilot is often challenging and complex, Jake still has a deep appreciation for the simple things in life.

“I came back to see family and friends and to hunt deer,” he says.

Jake says he learned a lot throughout his journey to emulate the men who’ve inspired him, and most of all he’s learned to keep on learning.

Jake’s military obligation will conclude in September of 2026. After that, he may pursue a career in aviation, perhaps commercially or for a federal agency.

Jake is the oldest child of Kim and Jake Newton. His sister, Kaytlin, is 22.