Almont High School is where the match was contested.

With the decision, Imlay City watches an outstanding 30-14-4 season reach an endpoint. 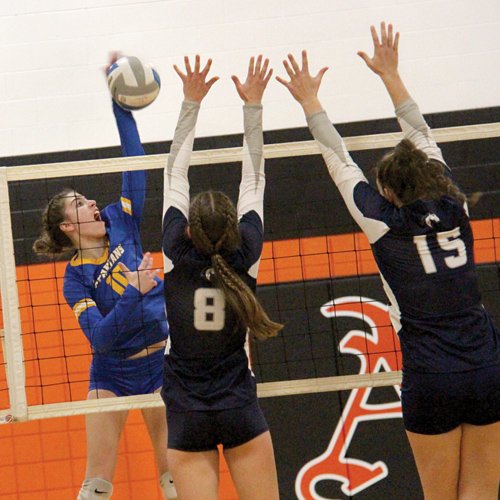 Imlay City’s Emma Keeping connects on a shot at the net during her team’s Division 2 district showdown with North Branch.

“I am so incredibly proud of this group,” Imlay City Coach Rachel Van Dyk said. “Not only did we play very good volleyball, we played with unity and grit,” she emphasized.

“Every point was a dogfight. It was an intensely competitive match I feel was worthy of Kellogg Arena in Battle Creek. It is a shame it had to happen so early. Though it was a tough loss, it was a great way to go out. I think we made our community proud.”

In Wednesday’s showdown, Imlay City let it be known from the outset that their much-anticipated meeting would be a battle from start to finish.

Imlay City drove that point across, jumping out to a 14-11 advantage to start the match.

North Branch then countered with four of the next five points, squaring the scoreboard count at 15-15.

They then followed it up with three of the next four points, closing out a 25-20 game one win.

The second and third sets would favor North Branch. It was there the Broncos triumphed by scores of 25-19 and 25-21, respectively.

Game four would see the momentum shift back to Imlay City’s side. It was there the Spartans started strong, bolting out to a 19-11 advantage.

The next 12 points were divided evenly, enabling Imlay City to close out a 25-17 game four win.

The fifth and final set would see North Branch start things off with a 9-4 edge. The Broncos then followed it up with six of the next 10 points, finishing off a hard fought victory by a 15-8 set five count.