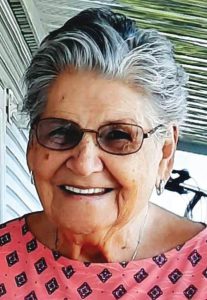 Esther Ramirez, age 89, of Pinellas Park, FL (formerly of Imlay City and Lapeer, MI) passed away peacefully, Wednesday, November 2, 2022, at home surrounded by family. Esther Frances Tolosa was born November 5, 1932 in Saginaw, MI. She was the daughter of the late Ramon and the late Lula (Jackson) Tolosa. Esther grew up in Saginaw, MI. She was a graduate of Saginaw High School, Class of 1950. She married Paul Ramirez on August 21, 1950 in Toledo, OH. She and her husband lived in Imlay City, MI from 1950 until 2009 when they moved to Lapeer, MI. Esther was preceded in death by her husband, Paul, in April 2017. In 2018, Esther moved to Pinellas Park, FL where she has lived since.

She was employed as an attendant nurse by Oakdale Center (Lapeer County State Hospital) for 31 years before retiring. Esther had a sideline hobby selling Tiara Glassware in Lapeer County. She was a member of First Baptist Church in Lapeer, MI before moving to Florida.

Esther will be remembered for her love of God. Her faith was a great inspiration to her children. She enjoyed family gatherings, playing games, sharing delicious meals, and listening to music. Her kind, patient and sweet disposition will be greatly missed by many.

Beside her husband and parents, Esther was preceded in death by her siblings, Raymond Tolosa, Mary Pena, Margaret Tolosa, and Alice Tolosa.

Please be sure to sign the online register at www.muirbrothersfh.com to share condolences and memories with the Ramirez family.