IMLAY CITY — On Sunday, Nov. 6, members of Sacred Heart Catholic Church will celebrate the 50th anniversary of the current structure, which was built in 1972.

To mark the occasion, a celebratory Mass will take place at noon and be co-officiated by Sacred Heart Pastor Fr. Noel Emmanuel Cornelio and Bishop Arturo Cepeda of the Archdiocese of Detroit.

A special reception will be held in the church’s social hall following Mass.

There are currently four Catholic churches within a family of parishes, including Sacred Heart in Imlay City, St. Nicholas in Capac, St. Cornelius in Dryden, and Immaculate Conception in Lapeer.

The Sacred Heart Catholic Church of Imlay City was organized by a group of Irish settlers who migrated to area in the early 1850s.

The first mass was said in 1852 by Father Vallandingham of Mount Clemens at the home of Martin Heenan near the junction of South VanDyke and Hunters Creek Road. 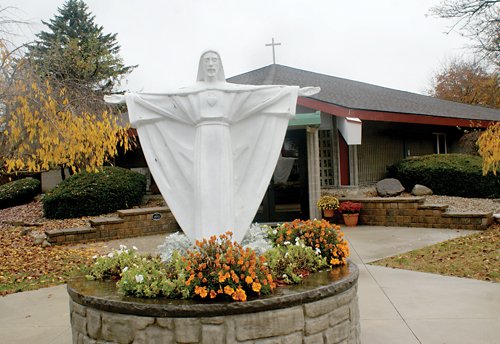 Today, parishioners and visitors to Sacred Heart Catholic Church will find themselves welcomed with open arms.

The parish’s next priest was Fr. Theophilus Buyse of Swan Creek, who in 1854, said mass at the home of Peter Hannan Sr. on S. Blacks Corners Rd.

It was around this time that about 30 Catholic families made plans to build an updated facility that was completed in 1867.

Sacred Heart’s first church was a small white, wooden structure on Blacks Corners Rd., which is now the the site of the Mt. Calvary Cemetery.

The land and timber for the church were donated from the farms of George Quirk, Sr. and Mr. Morris of Pontiac.

The church grounds featured a boarded fence that enclosed the churchyard, along with hitching posts to accommodate church members’ horses, oxen, lumber wagons and carriages.

The interior of the little church was mostly white with plaster walls and pews constructed from natural unfinished wood.

At the time there was no sacristy, however, the sanctuary ran the entire width of the building.

The lone confessional was enclosed in red curtains and situated in back of the communion rail on the left side of the building.

As a matter of note, a few chairs were positioned inside the railing as seating for altar boys, including Tom Hughes, Jim McKinney, Joe O’Neil, Bob MacGillis, and Ted Hannan.

During cold weather, a wood stove was the church’s primary source of heat.

For special occasions (weddings/funerals, etc.) church members would borrow an organ from the Patrick O’Neil family, which was often played by an organist from Lapeer. Some time later, church members were able to raise funds to purchase their own organ.

In 1893, Bishop Foley named Father Francis C. Kelley pastor in Lapeer, at which time plans were made to erect a new church in the Village of Imlay City.

In 1894, at a cost of $7,500, a new brick and fieldstone church was erected on Main Street in the village of Imlay City.

The church featured a spire, stained glass windows and miter stone on the front surface of the church, which was transported to the grounds by local farmers. In 1927, Fr. Ording was serving Imlay City, when a rectory was built adjacent to the Main Street church.

It was on Dec. 2 1972, that construction of the present church was completed and the former structure on Main Street demolished. The new church was built adjacent to the existing parish hall, which can accommodate up to 500 people.

Nearby, is a house that was originally the home to the Victory Noll Sisters who taught religion in Imlay City and at neighboring parishes.

A new rectory was constructed in 1974, on donated land for the construction of Sanctuary at Maple Vista, which is a residence for ambulatory seniors of all denominations.