Almont falls at home to Ovid-Elsie

ALMONT — The Almont varsity football team put up a good fight, only to drop a 21-14 verdict to Ovid-Elsie in a Division 6, Region 3, District 2 opening round playoff game it hosted last Friday night.

With the decision, Ovid-Elsie (8-2) advances to this Friday’s district championship battle where it will host Lansing Catholic (5-5). That matchup lists a 7 p.m. starting time. Almont sees a 6-4 season draw to a close.

“This was a battle all night long,” Almont Coach James Leusby commented. “It is tough to come out on the short end of this one but I know our kids played as hard as they could,” he noted.

“They can hold their heads high knowing that they left it all out on the field. A special thank you to our seniors for their leadership this season and all of the hard work they have put in over the course of their time in our program.” 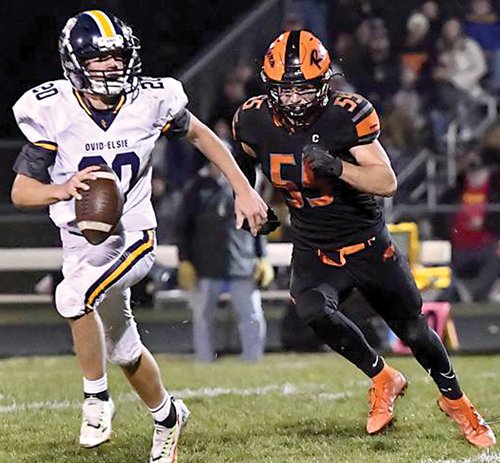 In Friday’s game, Almont jumped out to a 7-0 advantage after one quarter was over with.

Quarter two would see Almont collect seven points as did Ovid-Elsie, leaving them up 14-7 at the halftime break.

That score would remain unchanged until Ovid-Elsie went up 21-14 with 1:50 left.

On the ensuing possession, Almont (which had no timeouts remaining) moved the ball to the Ovid-Elsie 25 where a fourth-and-15 situation arose.

With about 30 seconds remaining, Almont dropped back to pass. Ovid-Elsie left them with no viable throwing options and their quarterback Trenton Kruse, who was scrambling in his effort to find an open receiver, was finally chased down and tackled.

Ovid-Elsie would then take over on downs. One snap later, the Marauders took a knee and ran out the clock.

The visiting side had held on for a narrow win.

For the night, Kruse completed four of 11 pass plays for 100 yards as Almont’s quarterback. He threw zero interceptions along the way.

The Almont ground attack wound up with 208 yards on 34 totes.

The Almont defense had five takeaways. Kruse and Ferman (an interception apiece) plus Nascivera, Battani and Ferqueron (a fumble recovery apiece) furnished those.