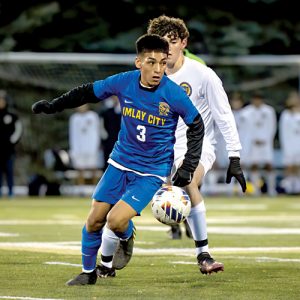 Christopher Galiana protects the ball from a foe during a regional title clash last Thursday.

Pontiac Notre Dame Prep is where the match was contested.

With the decision, Imlay City wraps up an 18-5-1 campaign.

“We were right in the contest at the completion of regulation play,” Imlay City Coach Luis Hernandez commented. “Then Country Day scored in the first overtime after a series of unfortunate rebounds in the front of the goal,” he noted.

“Some injuries happened during the second overtime and two more goals were scored after we pushed up trying to score the goal that would put us back in the game. “Our team had a good season winning 18 games, the Blue Water Area Conference title and a district championship.

The next half would prove scoreless as well.

That meant a pair of 10-minute halves would determine which side prevailed.

Half one saw Detroit Country Day connect for one goal, while holding Imlay City to none.

The next 10-minute stretch saw Detroit Country Day net two goals and Imlay City manage none, leaving the former with a 3-0 win to celebrate at night’s end.