Cards get win in district opener 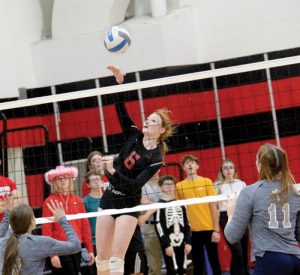 Rilynn Lindsay, of Dryden, connects on a shot at the net in Monday’s district clash.

Graham handled the bulk of Dryden’s playmaking responsibilities. She was credited with 30 set assists.

Peter (four) along with Abromaitis and Deel (one each) supplied Dryden’s digs.