Spartans close out year with loss

IMLAY CITY — Imlay City wound up on the losing side of a 32-22 outcome to visiting Flint Southwestern in a non-league varsity football game last Friday night.

With the decision, Flint Southwestern ends the 2022 campaign at 2-7. Imlay City finishes at 1-8.

In Friday’s game, Imlay City and Flint Southwestern ended the first quarter with zero points each. 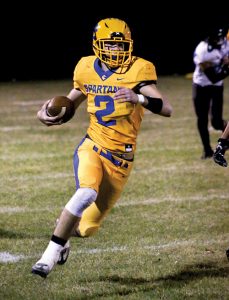 Imlay City’s Brady Vanderploeg looks to pick up a first down in Friday’s game.

When the action resumed, Flint Southwestern established some much-needed breathing room. Aided by a 16-0 third quarter advantage, they were able to widen the gap to 24-6 with 36 minutes gone.

For the night, Brady Vanderploeg completed eight of 14 pass plays for 80 yards as Imlay City’s quarterback. He threw one interception along the way.

The Imlay City ground attack wound up with 189 yards on 36 totes.

The Imlay City defense also registered a pair of takeaways. Brady Redd and Jerry Zheng (a fumble recovery each) furnished those.