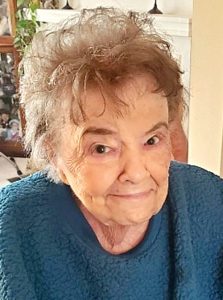 Mary Elizabeth Anne Dougherty, aged 96, passed away peacefully at home on October 20, 2022, surrounded by her family. She was born April 18, 1926, in London, Ontario, the daughter of Joseph and Marie (Francis) Garceau. Elizabeth married her beloved husband Nathan Lyle Dougherty on October 7, 1950, at St. Catherine Catholic Church in Detroit, where both had graduated from high school.

Elizabeth and Lyle raised their family and entertained countless friends over the years at their home on Hayes Road in Roseville. Elizabeth was an avid seamstress, making clothes for her children and even her own wedding gown. She was a language wizard who enjoyed playing Scrabble and correcting grammatical errors. Her fondness for elephants resulted in an unparalleled collection of elephant figurines. Most of all, she loved her four “dumplings” (children) and her many grandchildren and great-grandchildren, who will miss her greatly.

She was preceded in death by her parents; her husband, Lyle; and her siblings, Paul Garceau, Joan Garceau, and Cecile Henderson.

Memorial donations may be made to the Myasthenia Gravis Foundation of America. Messages and photos can be contributed to Elizabeth’s memorial page at www.muirfh.com.