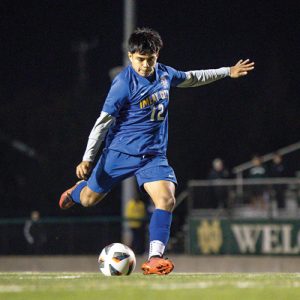 Edwin Galindo looks to connect on a shot during Thursday’s title confrontation.

With the result, Imlay City (17-4-1) advances to a regional semifinal contest at Notre Dame Prep where it will square off versus 10th-ranked Frankenmuth. That matchup took place last evening (October 25th) after our deadline.

“The boys really played their hearts out, fighting all the the way through and managing a tie at the end of regulation,” Imlay City Coach Luis Hernandez commented. “The guys are ready for the next phase of the tournament and they know they can go far,” he noted.

“It will come down to making the less mistakes possible. “But I am really proud of these boys and the passion they showed. I think they really sent out a message to everyone that Imlay City is a soccer town.”

In Wednesday’s battle for district supremacy, Imlay City and Lutheran North completed regulation play tied at one goal each.

That was followed by a pair of scoreless 10-minute overtime halves.

That meant penalty kicks would now decide the victor.

It was there Imlay City made all four of their attempts and Lutheran North was good on three, leaving the former with a 2-1 win to celebrate at night’s end.

Sergio Galiana provided the lone Imlay City tally during regulation play, that coming with 3:49 remaining, to square the scoreboard count at 1-1.

Jose Salcedo, Galiana, Edwin Galindo and Luis Barragan were the Imlay City players that connected during the shootout.

Quintin Ramirez drew the goalkeeping assignment for Imlay City that day. He was credited with 10 saves.