ALMONT — The Almont varsity football team kicks off what they hope will be a lengthy postseason run in just a couple days from now when it entertains Ovid-Elsie in a Division 6 opening round playoff game.

It marks the 13th straight playoff appearance for Almont.

Almont, which tied Cros-Lex for third place in the Blue Water Area Conference, enters their upcoming battle coming off a 42-21 road setback to non-league counterpart Goodrich. 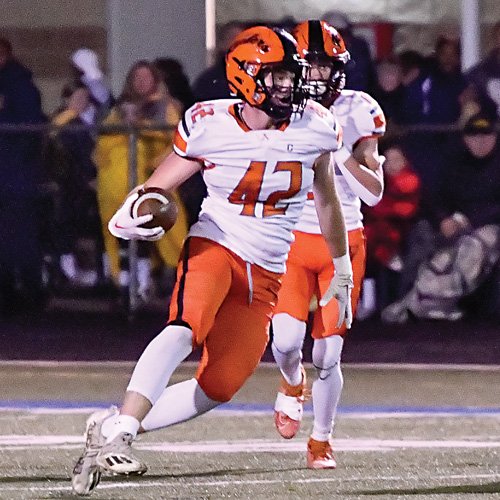 Almont’s Ayden Ferqueron heads up the field in a game with Goodrich this season.

Before that, Almont prevailed in five of eight matchups. It was there the team obtained a 35-24 road win against non-league foe Marysville; notched a 44-0 victory over visiting non-conference counterpart Hamtramck; registered a 42-17 road triumph against league adversary Imlay City; dropped a 34-14 verdict to Blue Water Area conference foe North Branch at home; fell 14-10 to league counterpart Armada on the road; picked up a 37-26 road victory over Blue Water Area Conference adversary Cros-Lex; and claimed a 35-14 win against league foe Yale at home.

Prior to that, Ovid Elsie won six out of out of eight contests. That stretch included a 36-8 non-league road loss to Portland; a 55-7 victory over league foe Byron; a 28-22 loss to visiting conference counterpart Durand; a 16-6 road triumph against league foe Montrose; a 29-0 non-league win over visiting Dearborn Edsel Ford; a 49-13 conference victory against visiting Chesaning; a 14-13 road triumph over league counterpart New Lothrop; and a 54-18 win against visiting conference foe Mount Morris.

Almont Coach James Leusby knows his team must come prepared to play or their postseason run will prove short.

“We will have to play one of our best games of the year,” Leusby commented. “We need to play mistake-free football and match their physicality,” he noted.

The winner of the Almont versus Ovid-Elsie game will go up against the winner of a contest between Durand and Lansing the following week.