ALMONT — Almont concluded the regular season portion of their schedule with a 42-21 road setback to Goodrich in a non-league varsity football confrontation last Friday night.

With the outcome, Goodrich improves to 8-1. Almont slips to 6-3 this season.

“All credit goes to Goodrich,” Almont Coach James Leusby said. “That is a very tough, physical and well-coached team,” he noted.

“Moving forward, we need to have a good week of preparation for the playoffs.”

In Friday’s confrontation, Almont and Goodrich collected seven points each during quarter number one. 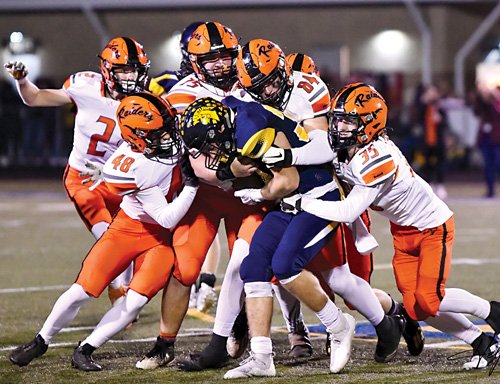 When the action resumed, Goodrich struck with a 21-0 third quarter advantage. That staked the them to a 42-21 lead with 36 minutes gone.

For the night, Trenton Kruse completed three of eight pass plays for 18 yards as Almont’s quarterback. He threw one interception en route to those numbers.

The Almont defense also registered a pair of takeaways that evening. Caydon Nascivera and Ferqueron (an interception each) furnished those.

Almont will look to bounce back this Friday when they entertain Ovid-Elsie in a Division 6 playoff game. That matchup lists a 7 p.m. starting time.